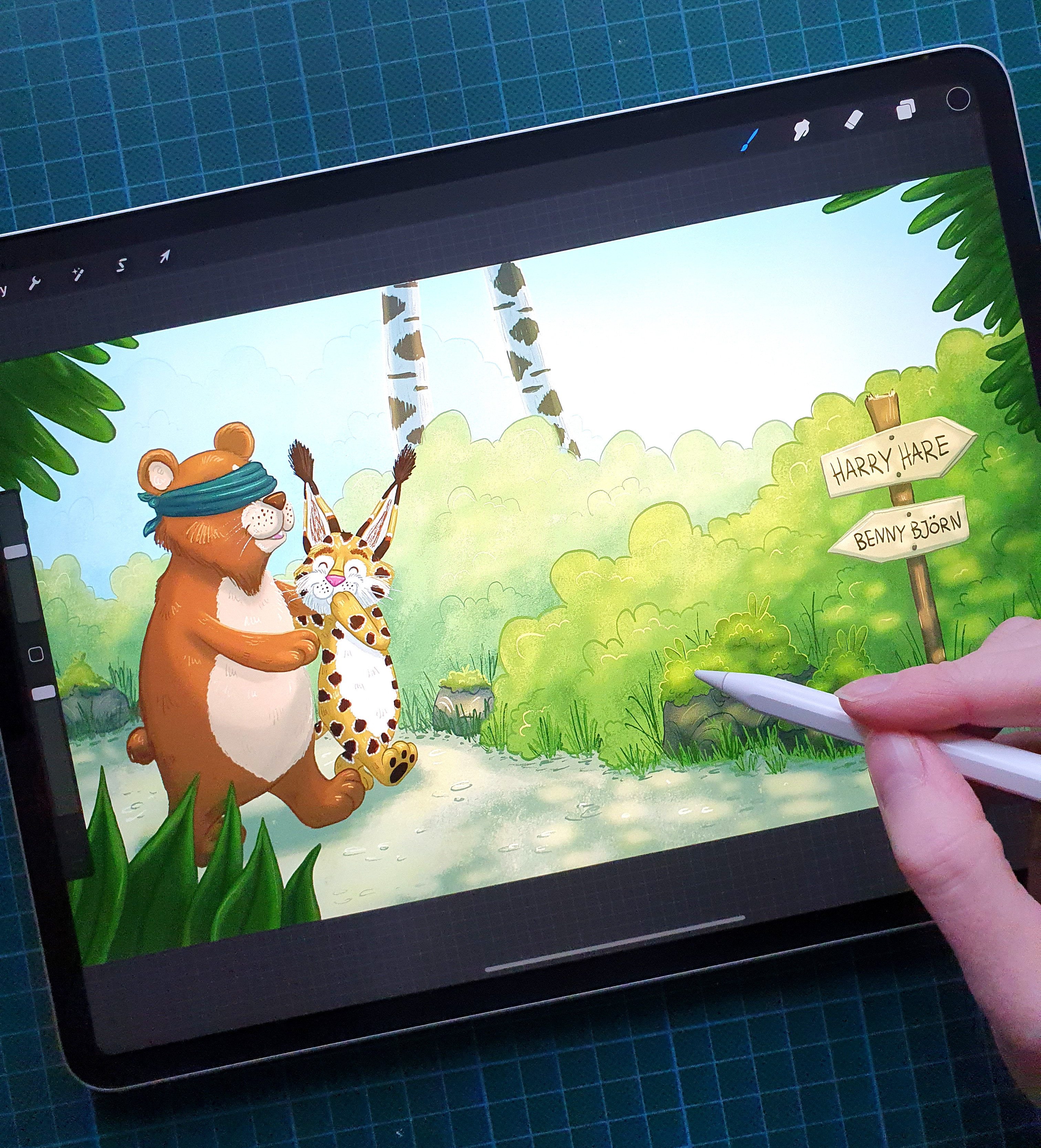 When I was little I was always drawing and writing, creating stories that I gave to my friends and family. My dream then was to become an author (because I didn't realise then that you could be an illustrator) and live on a farm with lots of horses. But then reality hit I suppose, and life took a different turn and I became a design engineer instead. A safe and steady carreer path, but it wasn't fulfilling me and I kept feeling that something was missing. It wasn't until I was in my mid twenties (I'm 31 in this writing moment) that I realised that being an illustrator is actually possible and a valid carreer. So I found my way back to storytelling and drawing and put everything I had into it, and since 2019 I'm working full time as a children's book illustrator. I simply cannot imagine a life without drawing and creating stories to share with the world!

Since I'm Swedish I grew up with a lot of the Scandinavian classics, like Astrid Lindgren. I think Ilon Wikland, who has illustrated many of Astrid Lindgren's books, has been a big influence throughout my life. That, mixed with american and Disney-esque influences. Today I'm very inspired by other artists and illustrators, and some of my favourites at the moment are Ben Mantle, Benji Davies and Zoe Persico. But of course there are many more!

I was very lucky and actually got an offer for a picture book deal the same day I sent out my very first portfolio. I think it was an insane luck in timing! I'm currently illustrating the third book in that series, and I'm very grateful for that first deal which opened the doors into the world of children's books.

Honestly I'm still perfecting it and will probably keep doing that my whole life. I think it's like that for all creatives, you evolve and learn new things. But as of right now I'm working completely digitally on my IPad and Wacom Cintiq. But I try to keep a "traditional" approach, meaning I try to find digital brushes that give the same textures and paint in the same way as if it was real paint. But of course thare are many perks with working digital - layers and adjustments ... and the ctrl z button :) But I would really like to experiment more with mixed media in the future, perhaps starting out traditionally on paper and then continuing it digitally. We'll see!

What piece of software or hardware could you not live without and why?

Software: Procreate for the IPad and Photoshop and InDesign for when I'm using the Cintiq.

How long does it take on average for you to finish a spread, from initial sketch to final colour?

This is such a hard question to answer, since every spread is different. But if it's a full bleed spread with lots of details and characters, it can take me up to 100 hours to complete. Sometimes even more! But for an average spread I would say between 30-40 hours, depending on the complexity.

I really hope that children will find joy in my illustrations! I want them to connect and recognize themselves in my work, but most of all I want them to have a good time when they're reading one of the books I've illustrated.

I love horses and have been riding since I was a little girl, so I try to do that as much as possible. However I don't have a horse of my own right now, I did when I was younger (but the dream of a farm still lives on!). I also enjoy being out in nature with my fiancé or friends, and spending time in our little garden. Reading books (real physical books, not those e-book thingys!) and playing games are also among things I enjoy.

Don't focus too much on what style or type of illustration you should do. Do what makes you happy and figure out a way to make that work in the industry.

I've recently studied Publishing and just started working part time as a Children's book Publisher. It's a great complement to my illustration carreer and I feel both fields benefit from each other. It's no secret it's hard to survive as an artist, so right now this is the perfect set up for me, to be able to keep creating but not worrying too much about money.

If you weren’t an illustrator, what would you be doing?

I would probably be working in Publishing, as a Publisher or an Art Director for Children's books.

I try to rest and do things that gives me energy. Sometimes that's not drawing at all and spending time outdoors instead. And sometimes doing a small illustration, lika a dtiys challenge, can help ignite the spark again. But really, I think having a creative block is your brain telling you it needs to rest. So I try not to put too much pressure on myself when it happens.

Horses! They are really really hard to draw, but I've loved it since I was a little kid.

Not right now unfortunatley, but I'm actively plotting how to make it possible to get a dog!