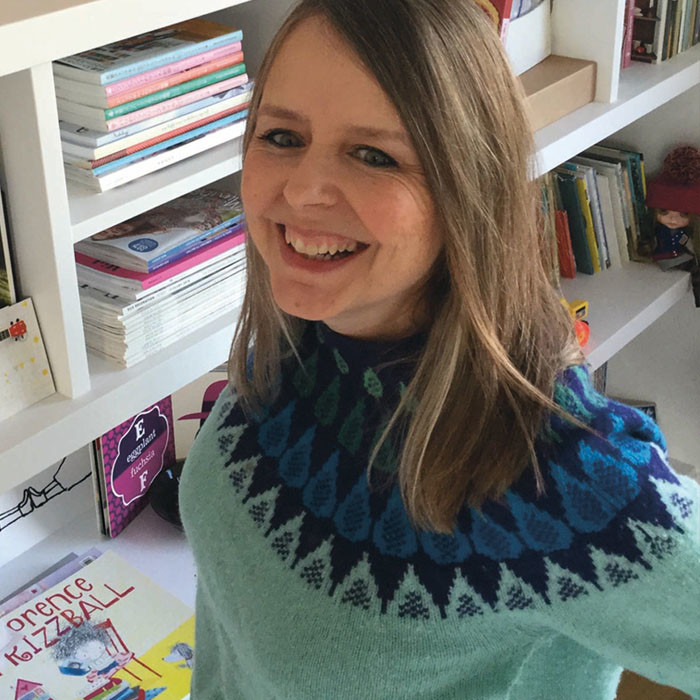 After completing a degree in Graphic Design I worked for two design agencies in London and then Hong Kong. I was creating packaging for toys, food and drink and even toilet seats! I was always happiest coming up with the concept and creating the visuals. After a few years I decided I really did want to focus on creating the illustrations. I decided to take a leap in to working freelance and within a few months I was given my first illustration commission by a friend I had worked with as a designer. I have been illustrating ever since.

I did a two year BTEC Diploma in Graphic Design at Suffolk College. I then went to Kingston University to do a degree in Graphics and Illustration. I planned to specialise in Illustration during year 2 and 3 but ended up choosing to focus on Graphic Design. In hindsight I'm glad I took this route as it gave me an understanding of the entire creative process. Whilst studying graphics I took every oppportunity to continue drawing.

I first became aware of illustration as a career and started collecting children's books in my teens. I particularly liked the work of Shirley Hughes as I felt she really captured family life. I was also a big fan of Helen Oxenbury. If I had to choose just one Illustrator it would probably have to be Dick Bruna. I love his bold,graphic and minimal style. I have a Miffy in almost every room in my home! Miffy wall art,lamps,money boxes, tiles.....

What piece of software or hardware could you not live without and why?

A pencil! Everything I do begins life as a pencil sketch. It doesn't have to be a specific brand, but I favour a 2B for sketching. I was told at art school to sharpen my pencil with a scalpel. I have done this ever since.

My favourite pen for writing is a Rotring Tikky Graphic 0.8. I also love the Pentel Sign Pen.

I don't like to use a sketch book. It feels like too much pressure. For years I used to draw on layout paper but these days I sketch on printer paper and use a Light Pad. When I was at art school the teachers said we should have a sketch book on the go at all times. I would draw the people on the bus on my way to and from college.

Do you offer more than one style, if so – talk us through the different approaches and the audience you are targeting for each.

I have been illustrating for many years and my style has evolved over this time. People say that it is always recognisable as my work whatever the medium or subject. I have worked in gouache, watercolour, ink, crayon, pencil and a mix of all of these. I still create most of the elements in my work by hand but usually assemble them in Photoshop.

What does a typical day in the studio look like for you?

I have always worked from home. I like that I can work at random times and fit my work around family life. I go for a walk at some point each day otherwise I feel sluggish. Sometimes ideas start to flow when I am walking. I often continue working in to the evening. I find it quite a productive time of day. When my children were young there was a period when they would get me up for the day at five in the morning. I did some of my best doodles at this time when I wasn't fully awake.

What would you say is a distinguishing feature of your artwork?

I would like to think that it is my line and the emotion in my characters. I am drawn to illustrating characters who are quite sensitive and a little bit lost.

I would love to see my Little Girl character animated. She is very special to me. I call her The Little Girl as I don't want to commit to a name.

The Little Girl came about as I needed something to post when I joined Instagram. I initially felt I should post 2 or 3 times each week but I couldn't share the commissions that I was working on. It can be one or two years before you can share something so I needed to create my own project. I had just bought some Sharpies for my son and started using them in an understated way along with pencil. I enjoy having to work within the square format and keeping it minimal. Sometimes an image works first go, other times it can take me 2 or 3 hours to create a very simple sketch as I will draw it over and over again.

I have been amazed by the response to The Little Girl from followers all around the globe. I sell prints, calendars and merchandise featuring The Little Girl through my online shop. She has her own book publishing later this year and is featuring on a greeting card range that I am working on with Woodmansterne.

During the day I have the radio on in the background. I am more likely to listen to music in the evening. I often have one CD that I listen to over and over for months! Recently it has been the soundtrack to A Star is Born.

I always loved to draw. My first memory was copying all of the Mr Men characters by Roger Hargreaves. In my teens I would do lots of drawing on location. I liked to sit on the street and draw buildings in detail. I made the night time scene below of Clapham North station when I was at University.

Tell us about the creation of your favourite character from one of your books.

My most well known character is on a sweet packet! I was given the brief a year in to my career to redesign the Marks & Spencer Plc Percy Pig bag. I didn't realise when I did that drawing that the bag would be unchanged 27 years on and that he would become a household name. I have drawn Percy ever since. When I am asked what I have created I often say Percy Pig as most people know him in the UK.

Sometimes I think it is more effective to just stop and have a break if a project isn't progressing. I'm grateful that I can take a walk along the coast to blow away the cobwebs. The image below was inspired by my daily walks and the people I see.

I enjoy drawing most things, but horses are a challenge!