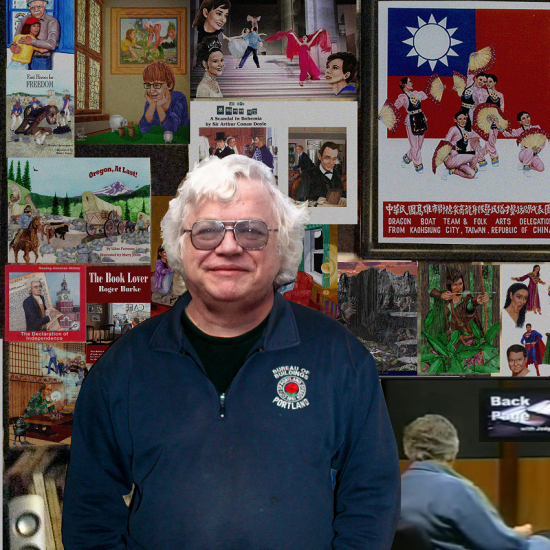 I don't remember a time that I didn't draw; I began drawing "seriously" in High School and intended to become a Technical Illustrator. Lack of planning and foresight led me to a degree in Architecture, instead of an education in Art. External distractions, such as "lack of work" led me to an eight-year career in construction; further distractions, such as "lack of work" led me to a career with the City of Portland as a Building Plans Examiner, from which I 'retired' with a medical layoff in 1998. But the dream never died... I've been a freelance commercial artist and designer for over 30 years; primarily working on commission for individuals as sort of a "professional hobby" until 1998. During my college years I exhibited my artwork in a number of non-juried shows, but found little time for "serious" illustration until 1988, when a ruptured appendix and a brush with death caused me to re-evaluate my goals and priorities. I realized that my future wasn't as predictable as it appeared; and that God has given me a talent He intended to be used for the benefit of others. I then decided it was time to get "serious" about my career as an illustrator. My body of work is fairly eclectic in its nature, and isn't specifically geared toward one type of illustration, however, all of my illustrations are realistically-styled. My preferred media are graphite, digital and colored pencil; I also use ink, watercolor, acrylics and airbrush as the need arises. Over the years I have created a large number of wildlife drawings, portraits, architectural and technical illustrations. I teach art classes for children on an irregular basis; I also do school visits. My first book jacket was published in the fall of 1999; my first children's book was published in 2000. My work has been published internationally in children's books, periodicals and on the Internet. It seems appropriate to me that I have chosen an "Apocryphal" text as the title for my "artist's statement"; I am a fairly "apocryphal" Protestant; in that while I do believe in the Divinely-inspired truth of the Bible, as it was transmitted in its original manuscripts, I don't believe that God has limited himself to one form of explanation as to His existence. Illustration, at its best, should reflect the nature and character of the illustrator, as well as present the story, idea or message that the author attempts to convey. As a Protestant, I find that I am less of an evangelist, and more of an encourager, or "exhorter" as the Scriptures are usually translated. Consequently, my work tends toward encouragement, or presentation of life as I would like it to be, and perhaps as I feel it was intended to be, rather than a presentation of either a moral or philosophical message. I like to 'capture images,' ones that move me with their character or beauty. Although I do, on occasion, create illustrations that are intended to present a statement of life as I perceive it, the majority of my illustrations are intended to simply present to the viewer a moment in time that I wish to share. I believe that the vast majority of us neglect to enjoy and experience the small moments of life, which often contain the greatest meanings for all of us. In general, if there is a "message" to be found in my work, it is primarily because that message is already present in the viewer, and I have had the experience of presenting it to the viewer.