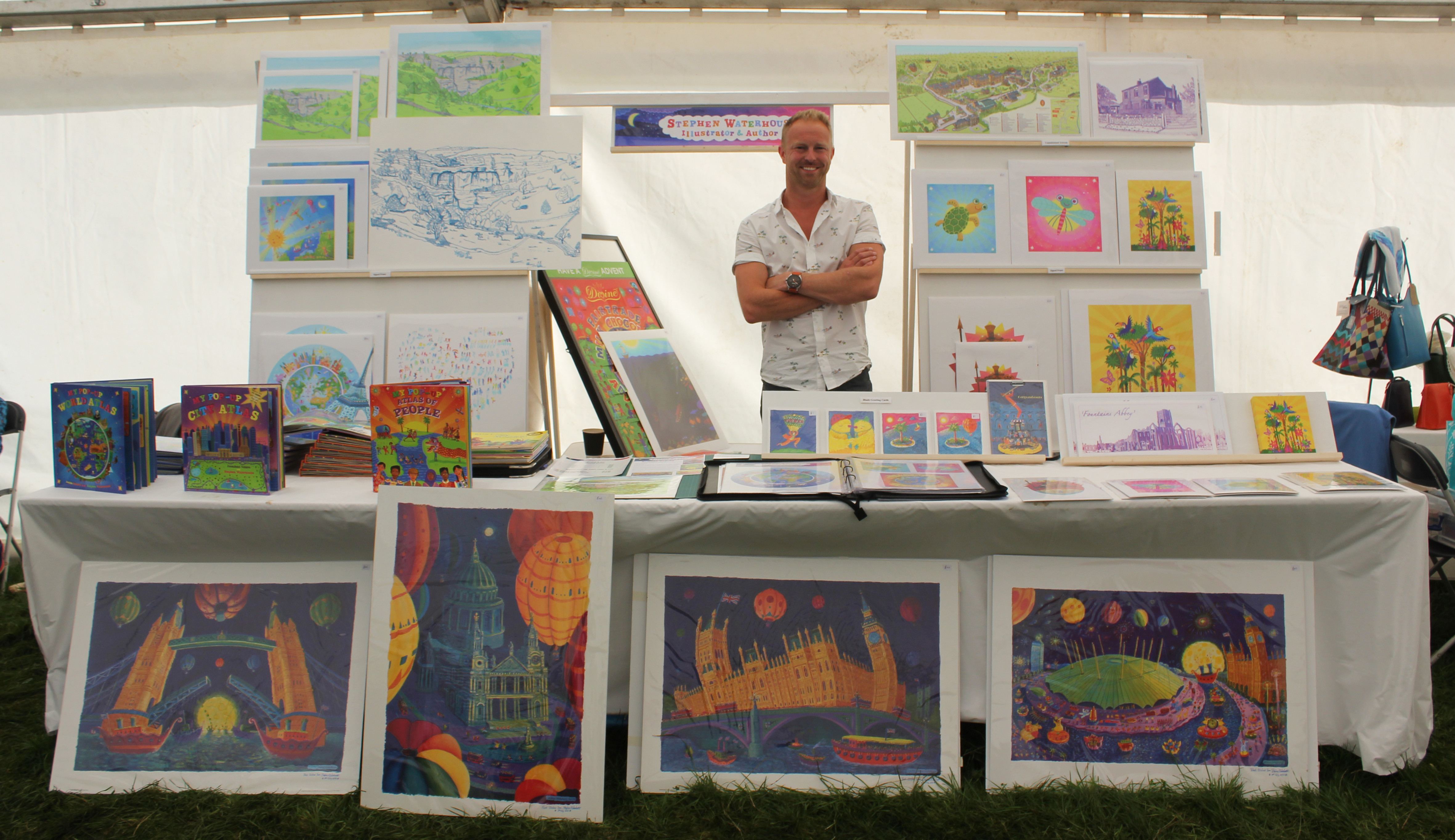 I was always in awe of how my Dad was so great at making things and how my Grandad liked to draw and make model buildings.  It was this, mixed with seeing the work of Monet, Van Gogh, Quentin Blake and Richard Scarry in books when I was very young (aged between 5 and 10 yrs old) which initially inspired me.  Star Wars and The Simpsons had a huge impact on me during these early years and I was inspired to draw and paint characters and landscapes.  I've had the bug to create artwork ever since!

Throughout my years in school, Art and Design was my favourite subject and I was interested in drawing, painting, photography, film and storytelling.....so it became very clear during my Foundation year at College that Illustration was the right path for me. During my degree course I became interested in storyboards, character design and children's books and these became my focus when I graduated, along with making greetings cards, posters and jigsaws.

I did an Art & Design Foundation at Huddersfield Art College and then the BA(Hons) Illustration at Loughborough University.

I now live near Skipton in the North Yorkshire Dales National Park.  I am constantly in awe of the surrounding landscapes, hills and wildlife and it never fails to inspire me.  I grew up on the edge of Bradford, close to the National Photograghy and Media Museum (with one of the first IMAX screens) and near Salts Mill where David Hockney's artwork is exhibited.....another two of my favourite places which inspired me when I was young.

Yes, for as long as I can remember I've always loved drawing and creating things.

The Enormous Crocodile, Charlie and the Chocolate Factory, Funny Bones and Richard Scarry Books!  Characters, humour and colour became so interesting to me.

My first commission was from the BBC Radio Times and it was for an illustration about a musical festival in Liverpool.  I remember it been such an exciting day when they rang me up!  I had just graduated a few days earlier and this really long fax came through which was a transcript of a radio play. (I didn't even have a computer back in 1998!!!!).  The same week I also got commissioned to illustrate 'The Runaway Chapati' for Cambridge University Press which has been one of my favourite jobs even after 21 years.  Most schools know the book and ask me to draw the characters and work with the children to help them create their own characters.

Yes!  I draw and write in my sketchbooks everyday and I carry one or two with me all the time if I'm travelling. They are so important to me, for recording observations and for playing around and experimenting with ideas, compositions and characters!

How many times do you tend to draw a character until you are happy with it?

Sometimes I draw characters at least 100 times, just so I get to know them really well.  After all, the characters have to be consistent and look like the same on each page in a book, it is so important for the reader to stay engaged and believe in the character(s).

I think the 3 Pop-Up Atlas's I did for Templar Publishing a few years ago really helped me to focus and refine my visual language. It helped to remind me that my work has always been about colour, characters, buildings and travel.  The books required a lot of detail so I began to make my work clearer, sharper and less 'fuzzy'.....although it was really about adapting my visual language to speak to older children (6-12 yrs) with this set of books.  Due to the hundreds of illustrations required, I had to find short-cuts and quicker ways of creating, so it also helped me to develop my sense of economy, but without compromising the quality of my artwork, which is always a very fine line and a tricky thing to achieve.

Yes, I like to experiment with a variety of media and materials and it almost always results in some very fresh and interesting imagery.......which helps to inform and develop the way I illustrate or create artwork.

What would you say is a distinguishing feature of your artwork?

The way I use colour in an energetic way is probably the most recognisable feature of my work.

Are you an author/illustrator?

Yes! I've always wanted to write and Illustrate and I don't want to ever stop!  I think it's one of the hardest creative processes to go through, but it is so worth it and rewarding if your book is commissioned.  I have more failures than successes but this drives me forward to find the next success!  I wrote and Illustrated 3 books about a family of penguins for Bloomsbury, which was so much fun.  I have a few other ideas in development, but I can't really say much about those at the moment as they are top secret! ;-)

I go for a run, a long walk or a swim.....or maybe go to the cinema......doing something other than sitting at my desk holding my head in my hands in despair usually frees up the creative cogs!

Yes, I have a dog called Ruby and she keeps me company in my studio!  We walk, run, swim, play with tennis balls and explore the hills and woodland several times a day!

'My Pop-Up City Atlas'! I enjoyed creating this book so much, it was a dream job!  I got to draw most of the famous buildings around the world and I also learnt so much in the process. I've visited New York City 3 times, so being able to visualise a whole pop-up spread of NYC was truly a dream come true.....I love the city, so much amazing architecture and energy!

Buildings, animals, landscapes and characters usually at night or at sunset so I can use bright, vibrant contrasting colours.

Have you visited any schools to speak or hold workshops?

Yes, I have visited over 350 schools in the last 20 years, to talk about my work and life as an author and illustrator.  I talk in school assemblies and run illustration and character design workshops. I have also taught part-time for 20 years at Loughborough University School of the Creative Arts (BAHons Illustration & Foundation Visual Communication).  I also create large artwork for schools and communities. I was recently invited to travel to an International school in Muscat, Oman to work with 800 pupils from the primary and secondary school.  This was an amazing experience!

I love to listen to Hans Zimmer, Max Richter and Philip Glass!  I find these musical composers / artists hugely inspirational and their music really helps my imagination!

I drive a yellow Landrover and I once drove to Chamonix on my Birthday from Yorkshire to draw Mont Blanc!

How important is it for you to be part of a creative community of people?