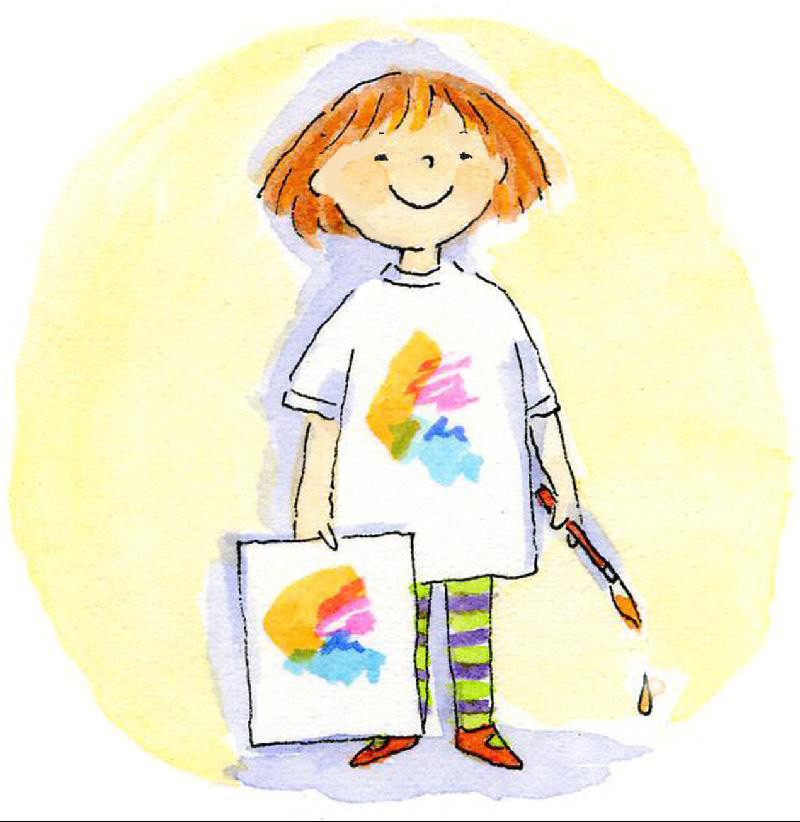 I don’t know how or why I decided to become an illustrator, but I was always.  I liked to draw and color and paint – and not of anything in particular –just whatever came to mind.  My mother liked to paint, but just for her own enjoyment and not professionally.  On family vacations while adults and other kids were playing cards and board games, I was always off drawing and sketching.  Unfortunately, I grew up not knowing how to play those games, but fortunately I grew up and became an illustrator!  I had some favorite children’s books growing up – like Winnie the Pooh and Mother Goose Tales.

The first jobs I had after graduation included working at a typesetter’s shop, a design studio (where I got to illustrate the original Meow Mix cat food logo/label) and then a federally funded education lab developing educational materials for kids.  Several years later I decided to take my portfolio to some advertising agencies and companies that used illustrators and then in 1980 I started to freelance as an illustrator.  I also visited the St. Louis County Library where I found a book on photographer’s and illustrator’s reps.  I contacted several reps asking about representation and I did get a positive response from one rep who got me my first paying job as an illustrator.  It was for Uh Oh! Gotta Go! A potty training book written by Bob McGrath of Sesame Street.  A few years after that job I attended an Illustrator’s Workshop in New York City, I took my portfolio along for review, and I gained representation with a different rep.  She gave me a lot of great advice before she retired after a year or two, but she put me in touch with another rep who represented me for years.  During the 80’s and 90’s I was busy almost full time with assignments from local publishing houses, several jobs for educational publishing houses, and I also illustrated some toy stacking blocks – one of which won a 2003 Parent’s Magazine Best Toys of the Year Award!  Each one of the twelve My Busy Day Stacking Blocks represented a time in a child’s busy day – like waking up, breakfast, getting dressed – and so forth and each block also had a touch-feel side.

I grew up in Kirkwood, Missouri – a suburb of St. Louis, and I still live in Kirkwood with my husband and two cats.  I always loved the art we got to make in elementary school and I took art classes in junior high and high school.  I loved my high school art teacher.  She was a big influence in my decision to major in art in college.  I remember one of her assignments was to make a grouping of some small items of our choosing and then painting them as realistically as we could.  I did major in “advertising and illustration” at the University of Kansas my freshman and sophomore years.  KU was to start a new graphic design major my junior year and courses were to include photography and typography.  But the new program didn’t receive funding and we met in a quanset hut, and had no photo lab, and I decided to transfer mid-year and finished at Washington University St. Louis with a degree in graphic design.

My illustrations have been described as humorous and whimsical.  I have always used pen and ink and watercolors as my favorite medium – sometimes mixing in some pencil and pastels.  In 2020 I finished illustrating a book I had worked on with a good friend of mine who lives in Ontario entitled When Michelle Met the Queen.   Because I referenced photographs for the characters in this story,  I wanted my style of illustration to be more realistic than my work normally is . When Michelle Met the Queen is a story of how Michelle Obama’s and Queen Elizabeth II’s families linked with one another across time. After the first Queen Elizabeth of England’s death, Britain became involved in the slave trade from Africa to the colonies.  First Lady Michelle Obama’s great, great grandfather was a slave, and it was after many years of struggle and hardship that her family finally saw blacks gain freedom in the U.S.  I wanted my illustrations of the people in the story to be recognizable.

Just a month ago I also llustrated a book entitled A Friend to All: Charlie Hoessle.  Charlie was the director of the Saint Louis Zoo for twenty years and the book was a gift for his 90th birthday.  This book is also a children’s book and I illustrated animals and characters in my familiar whimsical style. Charlie was a herpetologist and to this day is interested in and collects snakes. The critters depicted in this book have friendly, smiling faces!  But just as with When Michelle Met the Queen, I wanted to render Charlie and his family members in a more realistic style.

I love illustrating children’s books and materials – I try and have fun with assignments – looking at the story from a child’s point of view and being imaginative.  I keep a sketchbook and jot down ideas as well that are fun takes on a subject.  I think the most successful children’s books are those that are viewed through a child’s eyes and that are written in a language they can understand.  They are imaginative, sometimes outlandishly so, often touching, and relatable.  I hope children take these things away from my drawings.

When I am not illustrating I read a lot (mostly adult historical fiction and mysteries) but I also like to take classes (online) on some computer programs I want to be more adept with.  I also like to take online classes to learn creative tools to use for illustration.  I have sketched out a couple of books that I have not done finishes for yet but would like to see produced. And in addition to illustrating children’s publications I have created some products that I sell on Etsy, Pinterest and on my website https://goodbuddynotes.com/.  I have illustrated ten different alphabets – dogs, cats, zoo animals, boys, girls, babies, ballet, sports, garden and holiday letters.  I use the alphabets for personalizing children’s clothing, name notes, invitations, greeting cards and more.  I also sell greeting cards, books I have illustrated, nursery art and A Dog of a Year and A Catty Year calendars.

Where do you get the ideas for your characters?

When I am developing a character I take a lot of things into account.  Say I’m creating a character that is a horse who acts younger than its age and doesn’t have a lot of sense… I would look at images of horses’ faces and how young horses look and act in order to portray those traits in my sketches.  And I would make lots of sketches until I get the look I want.

What makes a good children’s book?

I love illustrating children’s books and materials – I try and have fun with assignments – looking at the story from a child’s point of view and being imaginative.  I keep a sketchbook and jot down ideas as well that are fun takes on a subject.  I think the most successful children’s books are those that are viewed through a child’s eyes and that are written in a language they can understand.  They are imaginative, sometimes outlandishly so, often touching, and relatable.

I don’t remember how a woman who owned Just Multiples, a company that sold products to parents of twins and triplets, and I met… but she used my illustrations for many of her products – a Twins Baby Book, a Multiples Manual, Parents of Twins and Parents of Triplets Schedule Books, announcements, birthday cards and more.