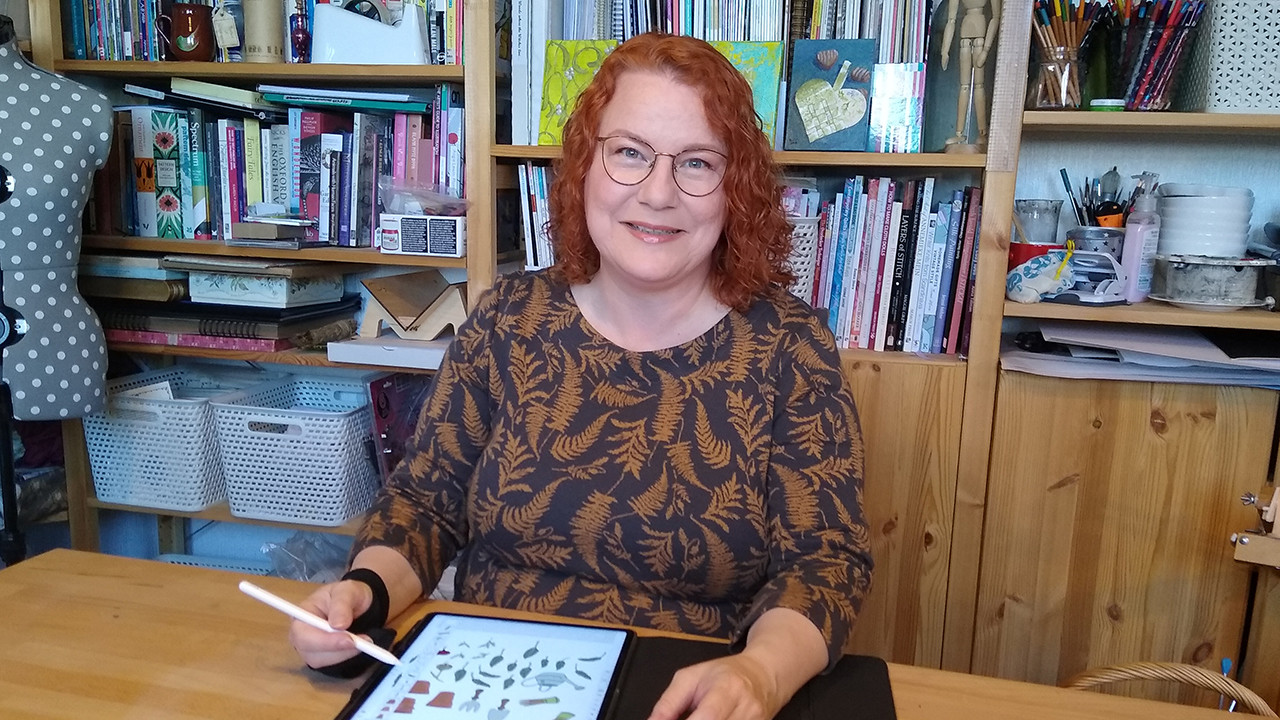 I knew from an early age that I wanted to be an artist, it's the only profession that makes sense to me.
When I was 17 I started taking art classes; live drawing, colour theory and composition, that sort of thing. I tried on and off to pursue a career as a fine artist, but people kept telling me my paintings looked like illustrations!

Visual story telling is important to me and design matters. As an illustrator I get to use all of my resources, things I've seen and read, empathy and imagination and the technical skills as an artist that I have aquired over the years. I'm constantly pushing myself to pick up new skills and improve on my workflow. That's another thing I love about this job, there's always more to learn.

I was born and raised in Sweden and moved to the UK in 2002 when I met my husband. We live in a red brick Victorian house with lots of fireplaces and high ceilings and I love it. The British temprament seems to fit my personality better, my mother actually says I was "born to live in England". I still haven't seen as much of the country as I would like to, but I've started to make a little list of places that I would really love to visit.

Was creativity part of your childhood?

It was a big part of my childhood, and my mother was very supportive in my artistic development. One of my favourite games was when she would put a big piece of paper or card (my father worked in printing so there was never a shortage of paper in our house) and we would draw and make up stories for hours, mainly about fairies as I remember.

As a teenager I was fascinated by the Pre-Raphaelites, especially the paintings by Edward Burne-Jones. And I loved the work of illustrator Hans Arnold. Something that comes through very clearly in my work is my deep and lasting love of Renaissance alchemical illustrations and the detailed imagery of medieval illuminated manuscripts. This also ties back to the Pre-Raphaelites and the Arts & Crafts movement, I use the same sources of inspiration as they did.

Anything and everything by Astrid Lindgren. And Moomin, I still love reading the Moomin books, they have a profound depth to them. I think really good children's books reveal something about life and what it means to be human. Serious topics are important, but also hope. Even though I couldn't put words to it as a child, I think Tove Jansson helped me re-frame some ideas about family and acceptance. Like the story about the little girl who became invisible because the lady who cared for her was constantly sarcastic. Astrid Lindgren's The Brothers Lionheart was another book that I loved. And even though it was a bit dark it also had a lovely message; that life goes on after death.

The first picture book I remember was a beautifully illustrated version of The Nutcracker that my grandmother gave me when I was three. I think my imagination probably added even more depth to the story than was actually there. I remember something about a forest where the trees were decorated with sweets and Christmas tree decorations. I think I need to illustrate my own version of that scene some day!

I do most of my professional work digitally because it makes editing easier and it cuts out the sometimes surprisingly time consuming task of scanning and cleaning up images.

I remember when I got my first Wacom tablet after I had just finished a job that involved making a large amount of spot illustrations and scanning them in and making them print ready. It was a short deadline and my hand was so tired towards the end that I could hardly hold on to the pen! It was a revelation being able to draw and paint directly in Photoshop and not have to scan and edit the artwork.

Nowadays I use my iPad and I have a 22 inch Huion Kamvas Pro that I love. I usually do the sketches with an HB pencil in a cheap sketchbook, I buy those "in bulk" five at a time so I never feel precious about them. My sketching is mostly quick and lose to begin with, I think through the composition with the pencil in my hand. If possible I show my ideas to the client early on so that I know that we are on the same page. Then I usually have to go online and research, look closely at what the thing I'm trying to describe actually looks like. I refine the sketch and then I take a photo of it with my iPad and either render the illustration on the iPad or, if I need to work at a higher resolution, in Photoshop.

As a child I was very drawn to books about the supernatural and paranormal and even now I still love that genre. But it needs to be cozy scary, not gory. I recently read Neil Gaiman's The Graveyard Book and I absolutely loved it! It would be a dream come true to illustrate books about witches, ghosts and/or cryptozoology.

How do you get your creative juices flowing?

Research, music and coffee. But my problem rather seems to be that I have too much juice! Anything and everything inspires me. I have a big cardboard box in my studio where I put sketches, newspaper clippings and scribbled notes with ideas. That box is overflowing! But I need to get things down on paper to be able to focus on the task at hand. If I feel blocked when I'm working on a particular illustration I work on something else for a little while and then it usually comes together. Or I do the washing up. Monotonous boring tasks seem to kickstart my imagination and summon the muse!

We have two cats, Willow and Bilbo. Willow I inherited from my daughter when she moved into a flat and wasn't allowed to keep pets. Bilbo I found on the street outside our house. He was so emaciated when I took him to the vet that I was told he probably wouldn't survive. For the first week he slept on my tummy and I spoon-fed him kitten food. Now he's so big he can hardly squeeze through the catflap!

Twenty One Olive Trees: A Mother’s Walk through the Grief of Suicide to Hope and Healing by Laura Formentini is the project that I'm most proud of to date. The book was written as a series of poems, letters and fables to her son Blaise in the year after his untimely death. I was immediately moved, not only by her tragic loss, but also her determination to transform her pain and grief into healing and peace and to gift this very personal story to the world to help those going through their own grief and dark moments. She chose the title Twentyone Olive Trees because her son was 21 when he died. She also intends to plant twenty-one olive trees in his honour at a healing sanctuary that she is currently creating.

Laura had envisioned her book as being illustrated like a medieval Book of Hours, and I was thrilled. As I am deeply inspired by medieval and Renaissance illumination and I absolutely relished the opportunity to indulge in intricate acanthus scroll borders and detailed illustrations. This was like the project I had been preparing myself for my whole life. The brief was for 21 full page illustrations, illuminated initial letters for each chapter, spot illustrations for the chapter headings and I created the artwork for the cover.

How many times do you tend to draw a character until you are happy with it?

The development phase, research, sketching, that's what takes the most time. How many times? Anywhere from 6 to 20, sometimes more! I think it works best if you have time to let it sit for a while and come back after a day or two and go over it again. Speed is good but not at the expense of quality.