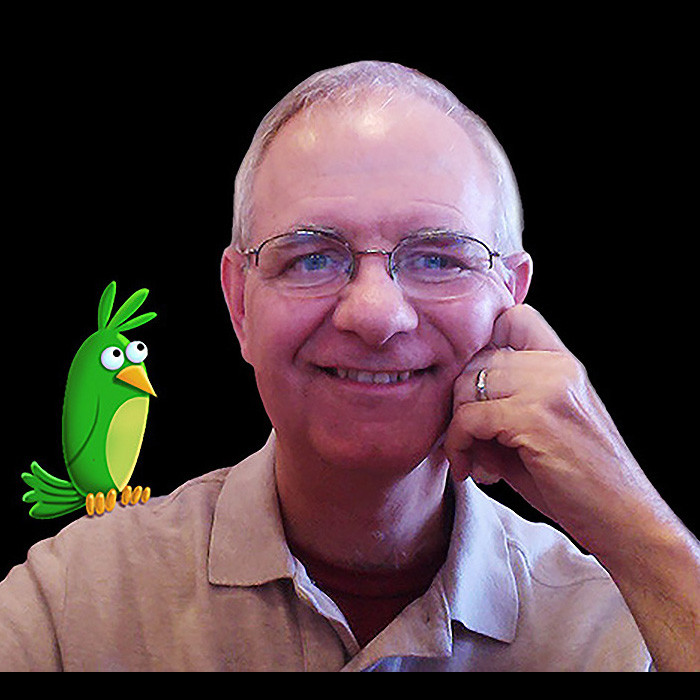 I came to illustration through a winding path that led through cartooning, fine art, back to cartooning, commercial art, and finally children's book illustration. What made me want to become an illustrator, particularly for books and juvenile product, was the realization that all my sensibilities leaned toward fun, story-telling images.

My earliest aspirations were to be a syndicated cartoonist. Wanting to be regarded as a serious artist, I immersed myself in a fine art curriculum at Forest Park Community College. I gained much from this experience and have only benefitted from hours of drawing, color theory, learning the painter's craft and so on. During my second year I was given a work study position as an artist for our local planetarium. This was my first foray into what was then called commercial art. It was there that I became excited about making art for storytelling and education. That first gig at a planetarium also left me with an appreciation for Astronomy, which finds its way into some of my art.

St. Louis is known as a music city (Chuck Berry, Miles Davis, Tina Turner, Scott Joplin). It is however a great choice for a self-employed artist in that it is very affordable, has a decent art community and an historic and respected Artists Guild (of which I'm a member).

Our St. Louis Art Museum is free to both residents and non-St. Louisans. Housed in the 1904 Cass Gilbert architectural gem in magnificent Forest Park (one of the largest urban parks in America; larger than Central Park in NY), St. Louis Art Museum hosts many important travelling exhibits and boasts a worthy permanent collection.

Music may be our national reputation, but where there is music there is art and St. Louis has a creative culture that is alive and growing.

Always. I started drawing, according to family lore, when I was three years old. Okay, most kids start drawing at about three, but my drawing drew attention and I really loved doing it. My only other considerations for a career was fireman (5 years old), and rock star (15 years old). When I found what firemen did in addition to driving great looking red trucks, I took inventory of my ladder climbing and rescuing skills and shyed away.

When my guitar playing entertained myself but few others, I dismissed that as a career path. I still play, but not in front of many live audiences.

It was always art. My very supportive parents, grandparents, and siblings helped keep the dream alive and I've never really wanted to do anything else.

Basically I like anything that is thought out, well-designed, and finely crafted.

Yes, but sparadically. I use working sketchbooks for assignments, and a variety of other sketchbooks for self-improvement, brainstorming, and playing. I mostly use Moleskine sketchbooks, or similar. Here are a few drawings from one of them. These were preliminary brainstorming sessions for Santa's Dog, a children's book I illustrated for author JoAnn Sky.

The next is my take on Hellen Mirren portraying The Queen. I sometimes freeze movies and make sketches. This is done with a Micron pen and goauche on D'Arches Watercolour paper, Cold Press. While this isn't children's book art, it's the kind of thing I do for personal edification.

Finally, the full color image below is where the dog brainstorm sessions led. This is one of the interior illustration for Santa's Dog.

What was your last ‘lightbulb moment’?

My last "lightbulb moment" was, no kidding, drawing a series of lightbulb related images. I did these before I knew this would be a question on the interview. I love round. Lightbulbs are round. I love light, lightbulbs are . . .

Any of the Tall Tales from American folk lore. Maybe Aesop's Fables, as I did an illustration for the Lion and the Mouse.